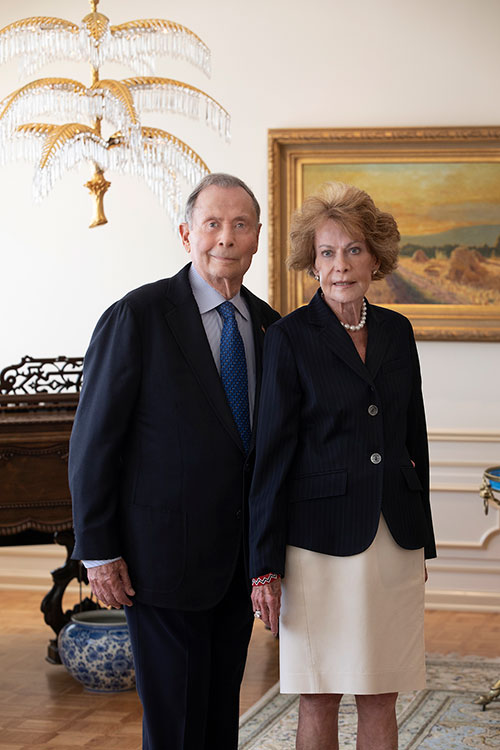 The College of Engineering is proud to announce a major donation of $ 15 million from philanthropists and benefactors John and Marcia Price to build a New Home for Computing. Pending approval from the University of Utah Board of Trustees, the building will be named in their honor.

“We are delighted to lend our support to this effort so crucial to Utah’s growing economy,” said John Price. “The University of Utah has an international reputation for innovation in computing, and Marcia and I want to help ensure this opportunity for this and all future generations of Utah students.”

Price’s contribution to the new, six-story, 209,000 square foot building will support the future growth of the School of Computer Science. The U produces 46% of the BS, MS and Ph.D in the public system. graduates in computer science and computer engineering with 1,929 students enrolled.

John Price is an American diplomat and former United States Ambassador to Mauritius, Comoros and Seychelles. He moved to Utah as a teenager and received a bachelor’s degree in geological engineering from the University of Utah in 1956. Price began his career as the founder of a construction company, which later became JP Realty Inc. and was listed on the New York Stock Exchange. Exchange in 1994.

Price is known as one of Utah’s foremost businessmen, successful throughout the Intermountain region. He has also served on numerous local, state, and national boards, including the University of Utah Board of Trustees from 1992 to 1999.

Marcia Price is a leader in the arts community with a lifelong passion for the Utah Museum of Fine Arts, where she is chair of the board. She was dedicated to the advancement of the arts in Utah, serving as president of the Utah Arts Council and later helping establish the Salt Lake County Zoo, Arts and Parks program. Price received an Honorary Doctor of Fine Arts from the University of Utah in 2006. The UMFA building as well as the New Theater Arts Building and Amphitheater are named in honor of Price’s contributions. to the arts. Marcia Price also sits on the National Performing Arts Committee at the Kennedy Center in Washington, DC, and is a member of the board of directors of the Utah Symphony and the Utah Opera.

John and Marcia Price live in Salt Lake City, where they raised their three children and continue to spend time with their eight grandchildren and three great-grandchildren.

Price’s donation launches a private $ 30 million campaign for the new $ 120 million building to be located in the “technology corridor” of the University of Utah campus, between the Warnock Engineering Building and the Sorenson Molecular Biotechnology Building. The University of Utah will make the new IT building its priority request for public funding in the 2022 legislative session. A campaign committee has been organized and led by legendary College of Engineering alumni John Warnock, Ed Catmull and Shane Robison.

The biggest gift from the engineering school

â€œThis wonderful gift is the most important in the 126-year history of our college,â€ said Richard B. Brown, Dean of the U’s College of Engineering. “It will be a transformation in helping us meet the responsibility we take as the largest producer of the public system of engineering and computer science graduates.”

“In addition to supplying manpower to Utah’s thirsty tech talent industries, the college is a major source of technology innovation and commercialization, spending nearly $ 90 million annually in spending. research for professors and 98 spin-off companies since 2006, â€Brun said.

The need for additional space has become critical. With 58 faculty members and growing enrollments, the School of Computing has grown too large for its current location in the 60-year-old Merrill Engineering Building. The new building will allow the School to double the number of graduates and expand its offering in data science, cybersecurity, fintech, machine learning and AI, and human-centered computing. Its construction will benefit the entire college, providing additional space for other disciplines to develop, modernize their teaching laboratories and produce more graduates.

â€œWhile distance learning will continue to have a place in course delivery, studies conducted during the pandemic have shown that students learn better and actually prefer face-to-face instruction,â€ Brown said. â€œThe new IT building will provide an environment where students will have access to the specialized facilities needed to teach subjects such as robotics and cybersecurity, and where they will develop the interpersonal skills that employers value, such as problem solving, work teamwork and communication. “

/ Public distribution. This material from the original organization / authors may be ad hoc in nature, edited for clarity, style and length. The views and opinions expressed are those of the author (s). here.

The calm morning gives way to a wet and cool afternoon

Direct Selling and Its Significant Impact on Utah’s Economy