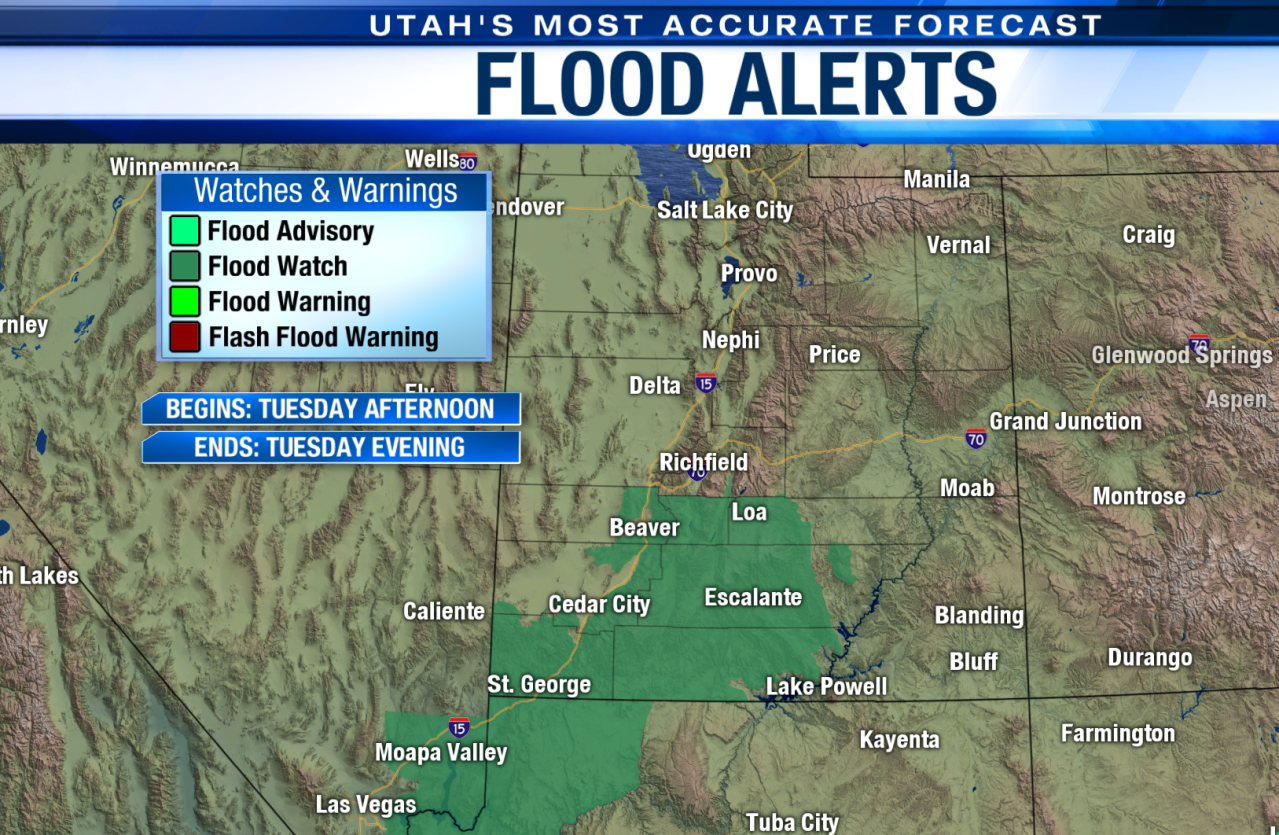 Heavy rains and flash flooding ahead for parts of Utah

SALT LAKE CITY (ABC4) – After battling excessive heat and heat warnings last week, another type of weather threat is in the spotlight in Utah this week.

Thunderstorms with possible heavy rains will become widespread by Tuesday afternoon for parts of the Beehive State.

People heading to the backcountry could run into flooding or flooded roads. A watch is issued when all the ingredients for a flood are present and it is probable that storms could produce that flood.

The monitoring includes areas that have already been inundated this year, such as Zion National Park and the area surrounding and including Capitol Reef National Park. Surveillance also extends to Bryce Canyon, south-central Utah, the southern mountains, upper Sevier River valleys, and lower Washington County.

Isolated thunderstorms are also possible in northern Utah over the next few days east of I-15.

You may recall that in recent weeks Zion National Park and Capitol Reef National Park have both experienced flash floods with damage to affected areas. Excess water, mud and debris flows forced crews to clean up after storms.

This week has the potential to repeat Mother Nature’s behavior!

As monsoon moisture moves into southern Utah, we’ll see scattered thunderstorms spreading further north as we get through the middle of the work week. These storms draw moisture-rich air south of us to New Mexico, Arizona, and Nevada, where thunderstorms have been plentiful, to Utah.

FOLLOWING: What causes a flash flood in southern Utah?

This adds another ingredient to the stormy mix, and the development of thunderstorms will intensify in the afternoon and evening as the day warms up. The risk of scattered storms will persist through the middle of the week for southern and central Utah, with an isolated risk of a storm in the upstate.

Storms become more isolated in the south by Thursday with the help of an increasingly pronounced westerly flow. Right now, a drier trend appears to be resuming over the weekend with a high pressure peak strengthening and temperatures tracing back into the upper 90s and 100s for the majority of Utah.

For flash flood updates, stay with the Pinpoint Weather team live and online. We are There4You!

Executives are pushing a new “innovation” network to grow Utah’s economy. Here is what it will do.