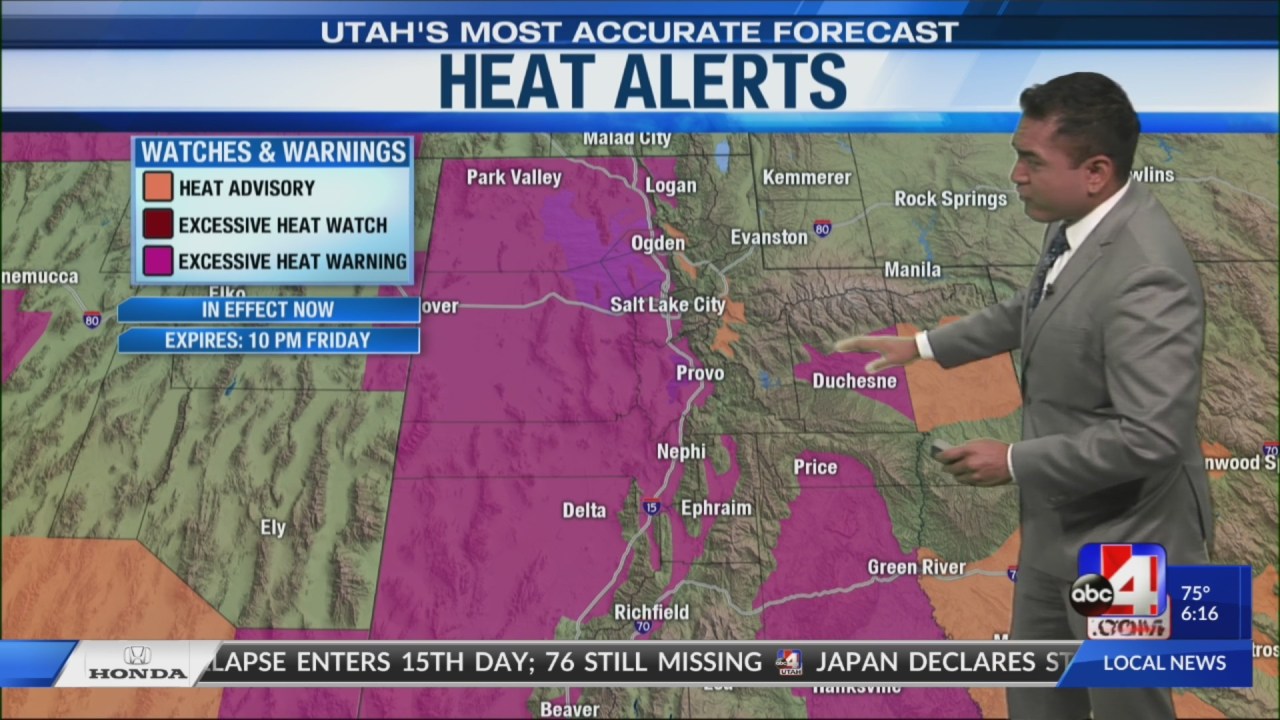 SALT LAKE CITY (ABC4) – Good Friday! Our record-breaking heat wave still has some momentum as we wrap up our work week.

This strong peak of high pressure broke heat records in Tooele, Provo and Kanab on Thursday, and temperatures today will drop slightly, but are still expected to hit triple digits statewide.

The Wasatch front will see temperatures warm again in the 90s above and below 100 for our Friday, with an expected high of 101 in Salt Lake City.

More cloud cover is expected to flow from the south and enter Beehive State, but daytime highs are still expected to reach triple digits in central Utah, Castle Country, Uinta Basin and the southern part of the state. Increased cloud cover will limit daytime warming in some places, but overall dry conditions are expected with high heat.

A weak, dry disturbance will impact northern Utah through Saturday, and it will ease the heat only slightly. Excessive heat warnings in place have been extended until tonight for the Wasatch front, the Western Desert, Sanpete, the Sevier valleys and the western Uinta Basin.

FOLLOWING: Could Utah see a La NiÃ±a winter this year?

The heat advisory for the Wasatch Back and the eastern state border has also been extended. The warning for southern Utah is in effect until Sunday evening.

The other weather problem we face is the increased risk of fire. As a state, we are hot and dry, and this slight disturbance will raise the winds.

As a result, a red flag warning is in effect until tonight for Wasatch Mountain, Uinta Mountains, Castle Country, San Rafael Swell and near Richfield.

NEXT: ‘Out of the Water’: Utah Reservoir Completely Dry, Others Dip To All-Time Low Levels

Any starting fire would spread quickly, so you need to be careful when you’re on the move.

Make sure you stay up to date for all of the weekend’s adventures with the most accurate Utah predictions live and online. We are There4You.