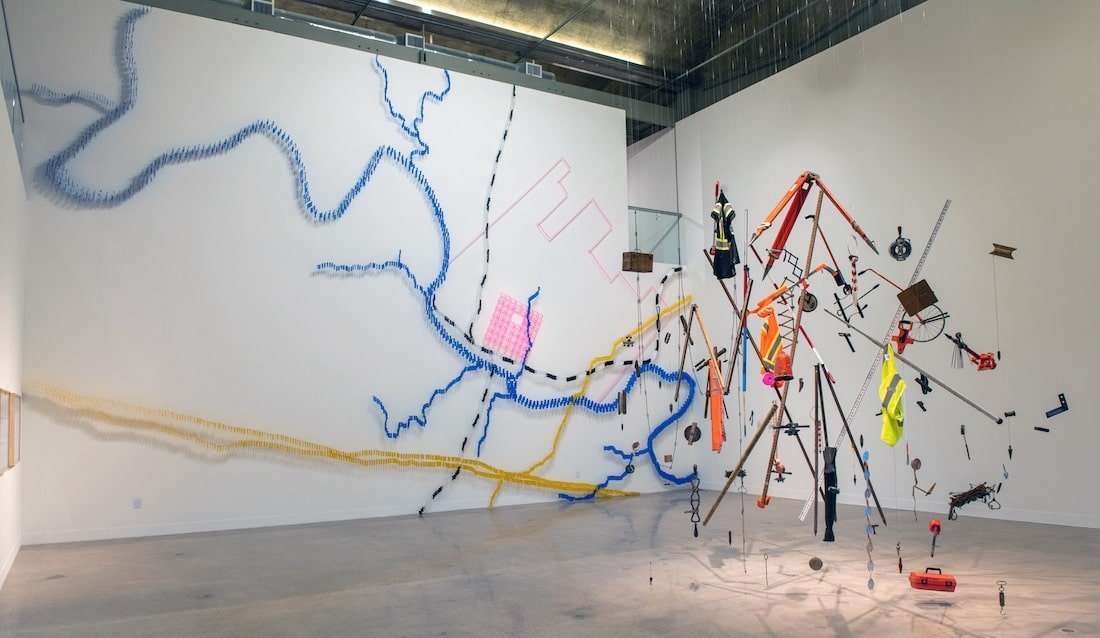 In October 2021, President Biden issued a proclamation honoring Native Americans and their contributions to American society in what could be seen as a redefinition of Columbus Day. Acknowledging the historic genocide, discrimination and destruction of the indigenous peoples of America marks a shift – between a past that celebrates a European male colonizer, and a future that rethinks history, raises awareness and pushes the discourse forward.

Timely exposure, “Carolina Caycedo and David de Rozas: Blessings of the Mystery” on display at UT’s Visual Arts Center (VAC), examines issues related to indigenous people in West Texas, including environmental activism, land rights, and how information on these issues has migrated and been defined.

Initially curated by Ballroom Marfa and curated by Laura Copelin and Daisy Nam, the VAC version (curated by MacKenzie Stevens), fills two galleries and a video projection room. Los Angles-based artists Caycedo and David de Rozas, identify their own collaborative works of art as well as a number of other historical sources, artefacts and material culture, prompting questions about the identity of Western Canada. Texas and land ownership concept.

The show begins with two full-scale installations. â€œHanging and Quarteringâ€ (2020) spans a wall, made up of duct tape, survey flags and spray paint in pink, blue, yellow, black and white. Like a huge Suprematist painting by Malevich, the design is dynamic, but reflects the geometric divisions, sections, and segments of the historic city plan of Austin. The colors of the flags represent the original color coding that indicated natural resources such as water and gas.

At the center of the gallery hangs a multi-component vertical sculpture called â€œMeasuring the Incommensurableâ€ (2020) made from what appear to be all known tools related to land measurement and mapping. Objects like orange safety vests, measuring wheels, poles, tripods, compasses, and levels hang from wires and, while not fully kinetic, suggest the dance performed by humans, as they study and build, oblivious to the layers of history embedded in the earth below them.

An exhibition label asks the questions: “How accurate is a science that reduces the earth to straight lines, numbers and economic value?” What is missed or lost in this process? Who are the rights surrendered to when this happens? “

Additionally, in this room are on display some of the artist pair’s detailed pen and ink drawings on the development of types of fencing, as well as a large colored pencil drawing on paper called “Somi Sek (The Land of the Sun – La tierra del Sol)” (2020).

Somi Se’k is a way the Carrizo Comecrudo tribe refers to the region surrounding the Rio Grande, the Chihuahuan Desert, and the Rio Grande Valley. More than a name, it represents a complex network of fluctuating ideas about time and place.

A bird’s-eye view map reveals different aspects of the land and sky showing evidence of human intervention, various bodies of water and animal life associated with the area, and even an endangered eyeless catfish found in a cave in the Amistad National Recreation Area, capable of crossing borders via underground waterways.

An exhibition label reads: â€œThe design functions as a counter-geography that visually represents the stories of some of the human and non-human relatives who inhabit these lands. “

In addition to its educational weight, the exhibition includes the loan from the Texas Archeological Research Laboratory at the University of Texas of several 1930s watercolors by Forest and Lula Kirkland. These rarely exhibited watercolors recreate pictograms found at rock art sites in Lower Pecos before they were damaged by environmental threats such as flooding and erosion. Other items from the Texas natural history collections at UT (Billie L. Turner Plant Resources Center and Austin Core Research Center), such as cuttings from various specimens of cacti, species of potted fish, and samples of soil provide an additional understanding of the land and its biodiversity.

Vintage postcard collages advertising West Texas attractions remind viewers of the role of tourism in commodifying the land, while a vintage edition of the Hasbro King Oil game hits home with misguided US capitalist values . (King Oil is a game where kids can divide plots of land on a plastic board, buy pipelines, and drill for oil as they ultimately try to ruin each other.)

Caycedo and Rozas’ multidisciplinary approach is complemented by a digital video installation of the 47-minute film â€œThe Teaching Handsâ€ (2020). The panoramic video brings together experimental visuals, archival footage, rock art and artifact images, and reconstructions, focusing on the history and philosophies of the Carrizo Comecrudo tribe and told by Juan Mancias, president from the Carrizo Comecrudo tribe of Texas. Before seeing this exhibit, I didn’t know the tribe, but I discovered that I was not the only one. The tribe website responds to their lack of representation by stating,

â€œThe Carrizo / Comecrudo is well hidden in the pages of history, as they are hidden in today’s society. If the cover-up was for the preservation of survival, the poor collection of information by early Europeans, the lack of interest in a less aggressive tribe, or the lack of anthropological interest, or the Christian perspective of peyote, nevertheless, this little writing on the nation manages to leave historical traces. “

Learning more about the tribe, its resistance, and the complicated relationship between the land of West Texas and its people was a pleasure. Caycedo and de Rozas have helped open dialogue and reshape our understanding of Indigenous history in an area of â€‹â€‹Texas applicable to geography beyond.

A very different type of exhibition, centered around the voice of an individual artist, is also presented at VAC. San Antonio artist Joey Fauerso has been on my radar for some time, more in name than in actual understanding of his practice. his show “Wait for it”, showcases an artist in the prime of her life and makes the most of what is available to her.

The work on this show was done primarily during containment. It includes paintings, prints and drawings as well as a four-channel video installation. The Exhibition Thieves include the two massive acrylic paintings on canvas “The Waiting Room” (2020) which received their own room near the rear of the exhibition and “Crawling Through Pando # 2” installed on the floor at its entrance.

At nearly 12 feet long and seven feet high, â€œThe Waiting Roomâ€ presents a new kind of reclining nude. From the back instead of the side, the monumental female subject is looking at the ceiling and not the viewer, although her dog to the left of the center is looking at her straight. Like an art-filled living room, framed and unframed background images fill the composition. Dreamy painted landscapes, exotic collectibles and the label tells us it, a painting by Eva Hesse are just parts of the collection.

“Crawling Through Pando 2” rests on the ground, folded and mounted on a steel pole, so that it is bent and rises from the ground. The portrait is a figure crawling towards another who leans back as if engaged in some sort of negotiation. Immersed in a monochrome version of Utah‘s forest tree colony, reminiscent of Wifredo Lam’s â€œThe Jungle,â€ the long horizontal painting captivates the viewer while the narrative remains a mystery.

Fauerso’s predominantly black and white palette continues in the captivating video installation â€œYou Destroy Every Special Thing I Makeâ€ (2017-2019). As soon as sets of constructivist-looking geometric sculptures are assembled and erected, they are noisily demolished, collapsing in piles. Enlisting his sons and other performers to perform actions in his studio, the artist incorporates his family and allusions to domestic attachments in unpredictable scenarios. Although staged, the videos oscillate between the feeling of being scripted and spontaneous.

Much of Fauerso’s work subtly exposes facets of her experience as a mother and as a woman. The quarantine and our shared experience of struggling with the idea of â€‹â€‹having to stay in one place stands out. A group of monotypes called â€œHolding Patternsâ€ represent related objects and human figures engaged in carrying on each other, leaning on each other or on all fours.

The title of the exhibit comes from a 2021 poem of the same name, by San Antonio poet Jenny Browne. The last lines read “Look how she imagines having a boarding pass wherever the waves crash without asking or having to ask.”

Cleverly curated, “Wait for It” highlights an artist taking inspiration from life and an inner world in an intelligent way. The convincing working group appears to be based on introspection mixed with humor and global openness.

â€œCarolina Caycedo and David de Rozas: The Blessings of the Mysteryâ€ and â€œJoey Fauerso: Wait for Itâ€ are both on view through December 31 at the Visual Arts Center in the Art Building, 2301 San Jacinto Blvd. , University of Texas campus, utvac.org